‘Physical fitness is the
first requisite of happiness.’

Around 1920 Joseph H. Pilates developed a new training method, ‘contrology’. This method consists of more than 500 exercises, which are mainly based on growth in strength, flexibility and control. The emphasis of the method is on the muscles, which ensure that the body is in the correct balance and support the spine. These muscles are called the powerhouse. The powerhouse refers to the lower back muscles, the abdominal muscles (from the lower abdomen to the ribs), the pelvic floor muscles, the muscles around the hips and the glutes. Joseph Pilates called his method ‘the art of control’. He strongly believed in the principle that you can use your mind to gain control over the functioning of your body. He developed devices with springs as a basis for resistance and strength. The devices are meant to support the client in a safe way in his/her workout. 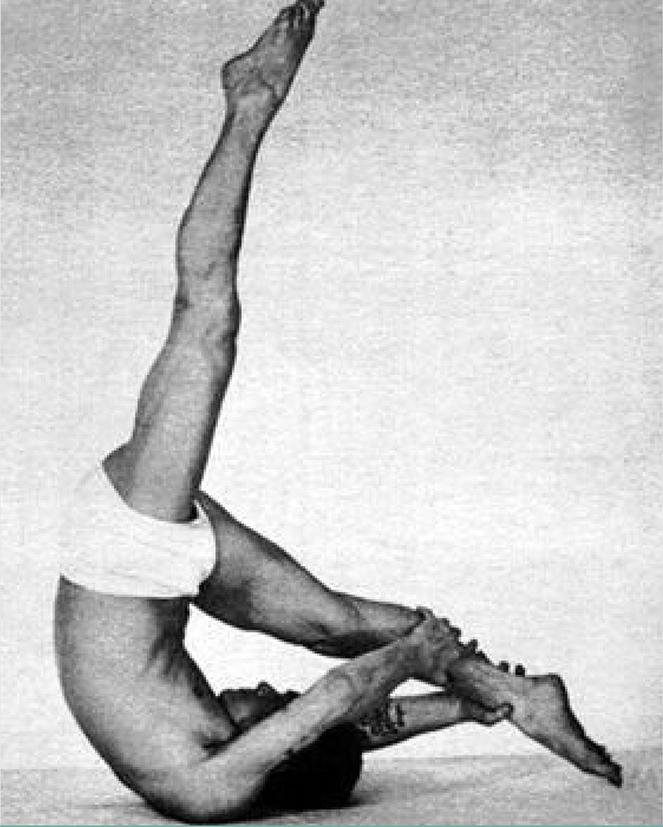 FOR WHOM IS PILATES?

Pilates is suitable for anyone who wants to work on a healthy and strong body. For young and old, man and woman. People with back problems or injuries are at the right place. If you want to work on an improved posture or get more flexibility in the muscles, then you’ve come to the right place. (Professional) athletes who mainly train one muscle group (for example: hockey, tennis, football, golf) will get more balance in several muscle groups through Pilates. In a nutshell, everyone who wants to work on strength, flexibility and control, but also wants to be more aware of his or her body.

Since I have been following Pilates at Zuiver Pilates, I have no more back problems. I am leaner, stronger and feel very good. Marjolijn is very professional and guides me well during the sometimes-complicated exercises, but it always works out fine. I can recommend it to everyone. 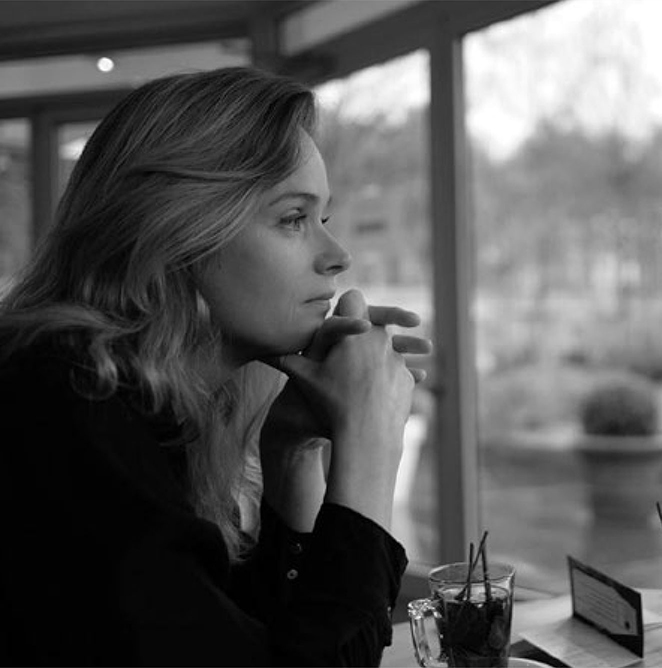 My name is Marjolijn Hols, since October 2016 I am certified for the Romana’s Pilates instructor level 5, training. I followed this training at The Pilates Studio in Scheveningen under the guidance of Marjorie Oron (level 1 instructor). The Pilates Studio, is the training institute, when it comes to passing on the pure Pilates method.

In the spring of 2014 my life changed from one day to the other. Almost every day I went running and I did among other things a half marathon. My lower back was hurting from time to time, until the pain became almost unbearable. One morning I woke up with pain shoots from my lower back that continued to my left foot. I lost strength and had a lingering leg as a result. In the hospital, I was told that I was suffering from a hernia. Suddenly I found myself in a bad situation being a young athletic woman. The hernia, the bulge, was too big according to the neurosurgeon, which resulted in surgery. After the operation, I immediately felt freed from the pain I had felt for six months. I realized that I now had to deal with my body with more love and awareness. After my recovery, my physiotherapist advised me to try Pilates. Your back will always be a weak spot, but through Pilates your core will strengthen enormously and that’s what you need, were his wise words. He advised me to look for a good studio, where they use the real pure method. That’s how I ended up at ‘The Pilates Studio’ in Scheveningen. After my first training with Marjorie Oron, I already noticed a big difference in my back. I could move more freely, paid more attention to my posture and became more aware of my body. I want to do more about this, I thought! The Pilates Studio offers the Romana’s Pilates training. The training in which the pure method 1 on 1 is taken over from the studio in New York where Joseph H. Pilates once started his studio. In June 2014, I signed up to do the training. That’s how my Pilates adventure started! During this period, I learned so much, gained inspiration and met so many good and driven people in the same field.

In October 2016, I completed my theory and practical exams and since then I have been working with great pleasure in The Pilates Studio. Now it’s time to spread my wings. With great enthusiasm, I started my own studio, ‘Zuiver Pilates’. Of course, I will still be very involved with the studio in Scheveningen. I hope I have made you inquisitive and enthusiastic to come and experience it for yourself. Make your body strong and healthy from a strong core and a healthy spine. There was a reason why Joseph H. Pilates said:

‘You are as young,
as your spinal column’

At Zuiver Pilates we work during a private session on various handmade devices from Gratz Pilates. The materials are durable and of very high quality. The main devices that will be used are: the reformer, cadillac, large barrel, wunda chair and the high (electric) chair.

During a private session, the personal trainer builds up a session based on what is needed for the body. The exercises are given at different levels, applied to the level of the client (basic, intermediate or advanced level). This takes into account possible injuries, conditions and the body type of the client. Each body is different and requires a different approach. We work on quality and not quantity. Besides the exercises on the devices, mat exercises can also be part of the session.rivate sessions are made by appointment, see the schedule for possible times. Sign up by calling 06-45548292 or info@zuiverpilates.nl, to make an appointment or for more information.

The mat sessions are available in different levels: basic, intermediate and advanced. During the mat sessions, a series of ground exercises are conducted in which work is mainly done on strengthening the powerhouse. The focus is also on extending and controlling the muscles and an improved posture. Weights and the magic circle can be used to supplement a lesson. On different days of the week we give mat sessions in small groups (max. 8 persons). Check the schedule for more info.

Duet session:
The duet session is on the reformers and it can be combined with a mat workout. So find your duet partner to share fun, share costs and let’s reform your body’s in a full body workout.

(the ticket is valid for 3 months, holiday periods taken into account).

A session must be cancelled 24 hours in advance, otherwise the session will be charged. You can cancel your session by calling 06-45548292 or by E-mail at info@zuiverpilates.nl.

A mat session will be given only if there are at least three participants. In the schedule, you will also find the schedules when a private session can be booked. For other possibilities, you can contact us by calling +31 (0)645548292 or send us an E-mail to info@zuiverpilates.nl.

Working in a relaxed atmosphere on a better core and body control. Through Zuiver Pilates I went from 30 physio treatments to 0 and my core has become much stronger as a result of which my back complaints belong to the past. This training allows me to ski and play tennis again, where in the past I had to be very restrained!

Joseph Hubertus Pilates, born on December 9, 1883 in Germany. He was a German-American entrepreneur and is the founder and inventor of the practice method ‘The Art of Controllogy’. As a child he suffered from asthma, rheumatism and rickets (bone disease). Despite his poor health, he intensively practiced gymnastics. In 1912 he moved to England, due to his German origin he was interned at the outbreak of the First World War. He taught his fellow detainees his practice method and they ended up becoming remarkably fit and less prone to disease. Joseph Pilates was transferred to a hospital where he started a rehabilitation programme for war victims. He expanded his method and used tools like mattress springs to train bedridden people. The apparatus reformer and cadillac were born out of this. In 1926 Joseph Pilates went to New York where he opened his Pilates studio. His technique was applied since 1960 to rehabilitate injuries and to increase the balance between strength and flexibility. Until his death in 1967 he refined his work, resulting in a unique practice programme that has been applied for some ninety years. 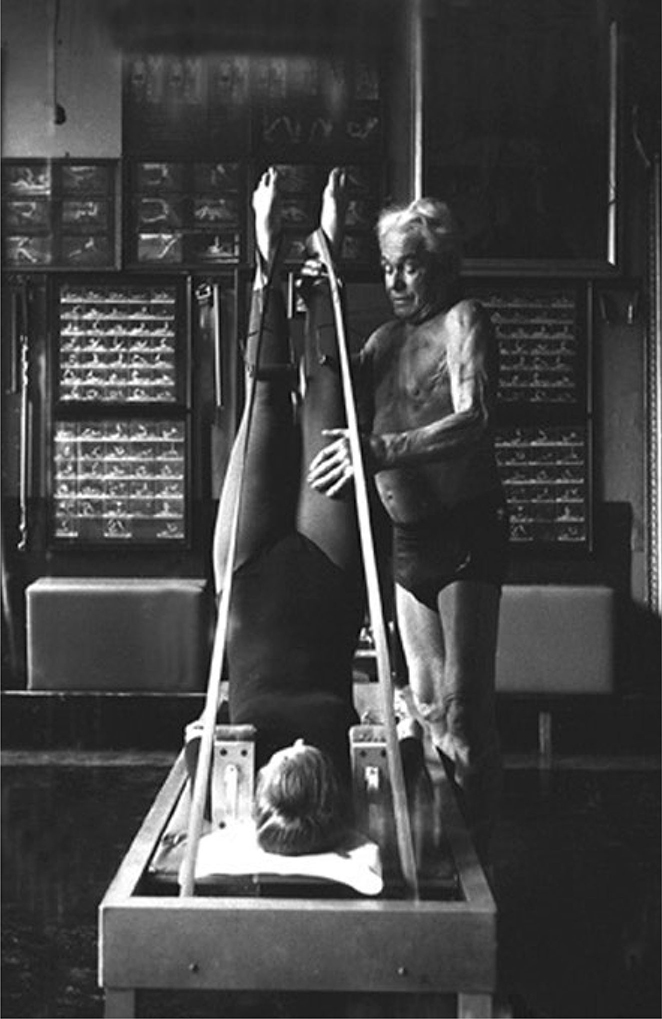 Romana Kryzanowska born on 30 June 1923 in Detroit. Romana first came to the Pilates Studio of Joseph Pilates in New York in 1942. She was accepted as a ballet dancer at the School of American Ballet. Because of a heel spur Romana could not dance anymore. By doing Pilates not only was her ankle and foot healed, she could also dance much better. Until the death of Joseph Pilates in 1967, Romana continued to work and teach at the studio. After the death of Clara Pilates in 1977, Romana and her daughter Sari Mejia-Santo continued working in the studio in New York. She then founded Romana’s Pilates and travelled the world to educate trainers in pure ‘Contrology’. Romana Kryzanowska passed away in her sleep on August 30, 2013. Her daughter, Sari Mejia-Santo, followed in her mother’s footsteps. She now travels around the world to give seminars, with the aim of building a global structure with other studios to protect and spread the authentic method of Joseph Pilates.

Marjorie Oron graduated from the Rotterdam dance academy. She started her career at ‘Djazzex’ in The Hague. Four years later she moved to New York to dance along with the famous ‘Dance Theatre of Harlem’. Marjorie came into contact with Pilates and went to The Pilates Studio in New York because of an ankle injury. After working with Romana Kryzanowska for four months, she noticed a huge difference. Marjorie Oron decided to study with Romana Kryzanowska. Once certified, she opened the first Pilates Studio in Europe, in Scheveningen. Romana then asked her if she wanted to become a teacher trainer and provide the training in Europe. In 1999, she started this in a larger building in Scheveningen and started the first certification process. People from all over the world come here to follow the training of the pure Pilates method, under the watchful eye of Marjorie Oron.

Zuiver Pilates is located at Tennis Club WW. Call or send me an E-mail for more info or to book a session. There are a limited number of free parking spaces on the grounds. If you park in the street, you’ll have to pay between 9.00 am to 5.00 pm.